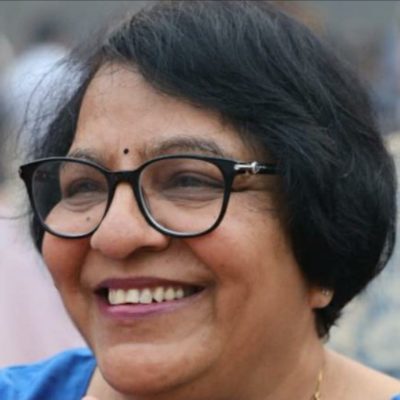 Ms. Sumedha Kataria is a Retired IAS of 2005 Haryana Cadre. A master of many arts, she is a motivational speaker, blogger, author, academician, poet, and podcaster. Her highly decorated and awarded career in Civil Services spans 31 years. With multiple master’s degrees in a wide array of fields of study, Ms. Kataria set out on her professional career as an academician. She, while teaching and shaping the young minds, volunteered as NSS Officer and worked towards various social programs like Clean Campus Campaign, Eye Donation Pledge, Blood Donation Camps and the Sampooran Swachh Mahavidyalaya Parisar Campaign.

Driven by her desire to serve society and to bring about betterment, she joined the Haryana Civil Services (Allied) in 1989. She provided her services as BD&PO in Kaithal and Kurukshetra District. She later went onto being selected for the HCS (Executive Branch) and became the catalyst of change and furtherance everywhere she was posted. While working as CEO of Kurukshetra Development Board, Executive Magistrate, Kurukshetra; she dedicatedly worked to preserve the rich history and develop Kurukshetra as the Holy City. Recognizing the true value of Gita in our lives through ever-changing times, she developed Jyotisar, the birthplace of Srimad Bhagwat Gita in a befitting manner. In 1991, she was the pioneer who initiated the celebration of Gita Jayanti Utsav which later came to be known as International Gita Mahotsav. It was under her visionary supervision that the International Gita Mahotsav attracted over 20 lac to participate in 2006. It was she, who along with her team of officers established the Sri Krishna Museum in Kurukshetra, inaugurated by Sri R. Venkataraman, the then president of India. Considered sacred by millions, described as one of the trio holy rivers in India, the Saraswati River is believed to have flown through Haryana. She as SDM, successfully initiated and implemented the Saraswati Revival Project.
Ms. Sumedha is the avant-garde who tirelessly formalized and dedicatedly worked for Open Defecation Free Kurukshetra. She minutely oversaw the population awareness campaign, sensitized children and women about personal hygiene and safety. It was her sincere efforts that paved way for 300 panchayats to be awarded the Nirman Gram Status in Kurukshetra District. To ensure sustainable development and tactful disposal of waste, she introduced a micro-level project for solid and liquid waste management, ‘Kachre se Kamaee’ is triumphantly running in approximately 60 villages in Kurukshetra. An intensive cleanliness program spanning across over 100 villages was launched as a personal motivation campaign under her administration. Her efforts were highly appreciated and she made presentations on Swacch Kurukshetra and Gold from Garbage at National Level Workshops.
Ms. Kataria having worked in the education sector, when given the right opportunity, initiated the revision of ACRs for teachers to ensure accountability and to provide enough credit and ownership for their academic contributions in schools. A philanthropist at heart, she contributed to the setting up of school for those with hearing disabilities to ensure a better life and increased opportunity ahead in life. She also helped establish a rehabilitation home for the Lepers in Kurukshetra. As Commissioner, Municipal Corporation, Karnal, she worked to get it placed amongst the 100 cities to be developed as Smart Cities in India. Engineered the launch of an intensive IEC campaign to motivate people for the segregation of wet and dry garbage at the household level. Later, an intensive IEC campaign to make it the first district to become 100pc ODF (Rural and Urban both) especially to ensure dignity and self-esteem of women and children in Kurukshetra district. She has held diverse designations and strived for the best. Held office as Additional Deputy Commissioner at Kurukshetra (18 months), Kaithal (6 months), and Ambala (6 months). Functioning as Deputy Commissioner, Panipat, she identified the modern-day problems and played an instrumental role in converting the area under flyovers into parking space for over 7000 vehicles. To enhance community involvement and the beatification of the weaver’s city, she undertook the task to get beautify the area by means of painting pillars and walls. Carrying forward India’s Urban Movement, Raahgiri, ensured that the people of Panipat came together to make this intelligent initiative a roaring success and contribute to a more sustainable India. ‘Panipat Pinkathon’ a trailblazing vision of Ms. Kataria to commemorate International Women’s Day was not only unique to India but the world. It entered the “World Book of Records” for being the largest gathering on International Women’s Day and placed Panipat among the elite. Foundation for an initiative for the rehabilitation of stray cattle under the name ‘Gau Abhyaranya’ was also laid by her during her tenure in Panipat.
Conferred with a number of awards and acclaims, Ms. Kataria is a truly decorated bureaucrat. She is a Bharat Vikas Awardee by International Business Council for Development work in Kurukshetra, Aadhi Aabadi Awardee, Bharat Nirman Literary Awardee, Saraswati Samman by Adabi Sanagam, Pt. Shanti Swaroop Sharma Award for Kurukshetra Development, District Administration appreciation at Independence Day function for contribution in the cultural development of Kurukshetra. She has been interviewed by DD National about the Nirmal Bharat Programme. It was during her tenure that scores of journalists from pre-SACOSAN and SACOSAN Summit in 2010 visited Kurukshetra to see ODF status, Nirmal Grams.  Apart from being a pragmatic civil servant, Ms. Sumedha Kataria is an avid author and has penned 7 poetry books in Hindi and one of them being bilingual in Punjabi and Hindi. She is also the author of the blog named ‘ Reflections  ’ and shares her thoughts, opinions, and pieces of wisdom about an array of topics. She has recently started her podcast and is currently posting a series on Energy Consciousness. A globe trotter, she has traveled to UK, Germany, Norway, Belgium, Netherlands, France, Malaysia and South Korea, Denmark, Sweden,  Middle East, and wishes to add more names to her list.

Be Inspired by Sumedha Kataria!